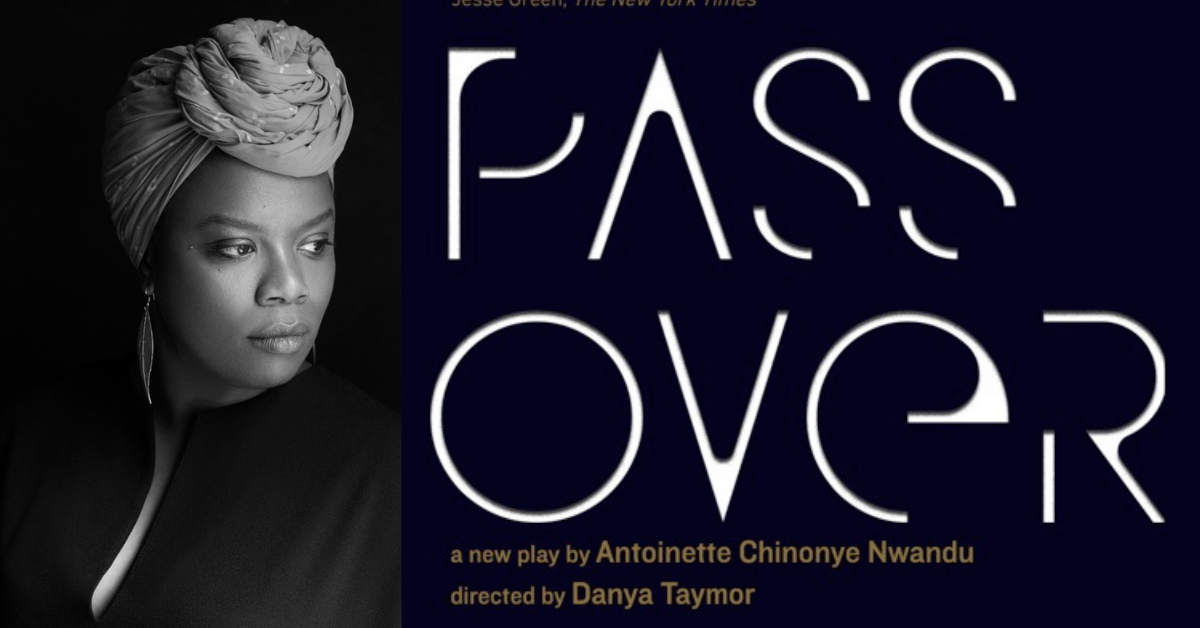 The critically acclaimed, award-winning play PASS OVER by Antoinette Chinonye Nwandu (Afira Akbar, The Guardian) will reopen the August Wilson Theatre, formerly the Broadway home of Mean Girls. This will mark the Broadway debut of Nwandu.

The Lincoln Center Theater/LCT3 production Is set to be directed by Obie Award winner Danya Taymor (“Daddy”, Heroes of the Fourth Turning) for a limited engagement, with exact dates and casting to be announced in the coming weeks.

Drawing inspiration from Waiting for Godot and the Exodus story, PASS OVER is placed on a city street corner. Moses and Kitch stand around – talking shit, passing the time, and hoping that maybe today will be different. As they dream of their promised land, a stranger wanders into their space and disrupts their plans. Evoking heartbreak, hope, and joy over its 85 minutes, PASS OVER crafts everyday profanities into poetic and humorous riffs, illuminating the unquestionable human spirit of young men looking for a way out.

If you saw the play Off-Broadway, you’ll want to see it again as some things have changed. Playwright and producer Antoinette Chinonye Nwandu said:

“In the summer of 2017, soon after our nation had elected Donald Trump as president, my creative team and I opened a production of Pass Over that shocked the conscience of our audiences. It premiered in Chicago at Steppenwolf and was captured by Spike Lee for Amazon Prime.

In the summer of 2018, wanting to prick the conscience of liberal Americans who remain tentative in their condemnation of violence against Black people, I changed the ending of the play, and my team and I opened Pass Over at LCT3 in New York. That version of the play was then produced throughout the United States, as well as in Canada, London, and South Africa.

And now, as my team and I prepare to produce this play again, I’ve asked myself: when the state-sanctioned murder of Black people in the United States remains visible routine, and the world continues to reckon with the loss, trauma, and alienation caused by the global pandemic, how do I meet this moment?

Though much about Pass Over remains a lament over the lives of Black people stolen too soon, I am happy to confirm that my team and I, along with our producers, are presenting a new version that centers the health, hope, and joy of our audiences, especially Black people. We are re-uniting to envision this play again, to tell a version of the story on Broadway where Moses Kitch both survive their encounter with white oppression.”

To sign up to receive more information on PASS OVER, visit www.passoverbroadway.com

“As August Wilson did almost 4 decades ago, Antoinette Chinonye Nwandu is leading us towards the Broadway of our best imagination,” said Jujamcyn Theaters president Jordan Roth. “Her brilliant vision, her unwavering voice, her galvanizing spirit show us the way forward, and all of us at Jujamcyn are so grateful that Antoinette and her exquisite play Pass Over are coming home to the August Wilson Theatre.”

The Lincoln Center Theater/LCT3 (Andre Bishop, Producing Artistic Director/Evan Cabnet, Artistic Director LCT3) New York premiere of PASS OVER opened at the Claire Tow Theater where, where it had an acclaimed, sold-out, and extended run and received the 2019 Lortel Award for Outstanding Play. The world premiere was produced and presented at Steppenwolf Theatre Company (Anna D. Shapiro, Artistic Director and David Schmitz, Managing Director). A filmed version of Taymor’s Jeff Award-winning Steppenwolf production, directed by Spike Lee, premiered at the 2018 Sundance Film Festival and at SXSW.

Jujamcyn Theaters and the producers are deeply committed to the health and safety of our audiences, performers, and staff. Among many enhancements, Jujamcyn has now upgraded all of its auditorium ventilation systems with MERV 13 filters, created a contactless experience for guests at the box office, entering the theatre and in bathrooms, and established rigorous cleaning and sanitation protocols. Based on CDC and New York state guidelines at the time of performance, protocols may include contact tracing survey, vaccination or negative test verification, limitations on belongings in the theatre, proper mask usage, assigned entry times, contactless temperature check, social distancing, and more. Specific health & safety protocols are subject to change but will be clearly communicated to ticket holders in advance of their performance. Ticket holders who do not comply with venue protocols will not be admitted.

In this article:Antoinette Chinonye Nwandu, Broadway, PASS OVER

Another one of Broadway’s most prominent stars is hitting the big screen! Cynthia Erivo (The Color Purple, “Harriet”) is set to produce and star...

Georgia will be on your mind for a long while if these Broadway stars have anything to do with it! James Wesley and Seth...