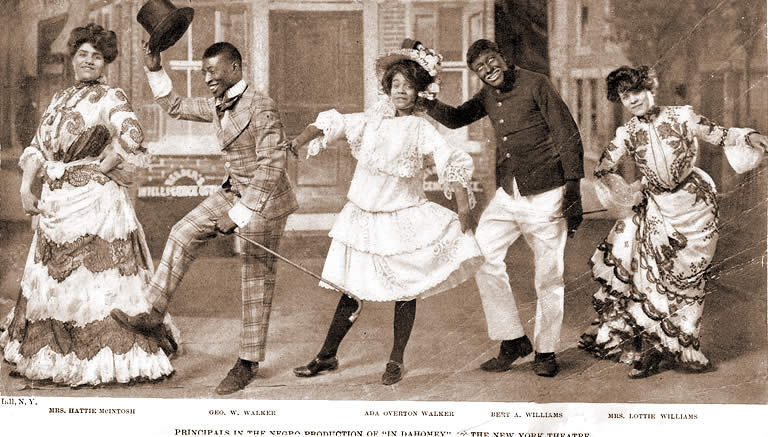 Photo Courtesy of the Gilbert and Sullivan Archive

The day was February 18, 1903, and “The Great White Way” was getting a major upgrade with the premiere of Broadway’s first Black musical. Although there had been productions of musicals led by Black casts done prior, it wasn’t until this day that one had reached a major Broadway house. The musical comedy, In Dahomey, was the first of its kind to feature the talents of Black creatives on and off stage. The creative team consisted of music by Will Marion Cook, a book by Jesse A. Shipp, and lyrics by poet, Paul Laurence Dunbar.

The musical debuted at the New York Theater with comedic duo Bert Williams and George Walker at the helm. The two brought their styles of improvisation, comedic timing, and musical acumen to an evolving Black theatre aesthetic that went from stereotypical minstrel shows to a universal vaudeville scene. It was also the first musical of its kind to bring culturally relevant knowledge of Africa and African nations to American theatre.

The premise of the musical was inspired by the backdrop of the back-to-Africa movement supported by the American Colonization Society which called for Black Americans to return to Africa to reclaim their land. The musical follows the schemes and journeys of two conmen, Shylock Homestead (Williams) and Rareback Punkerton (Walker), who discover a pot of gold and hatch a plan to return to Africa to take over Dahomey (now considered as modern-day Benin). Before they can even get there, money gets in the way of their friendship, their lives are threatened, and the musical peaks with a legendary cakewalk (a style of dance made famous by Blacks who would gather on slave plantations). The original cast also starred Pete Hampton, Fred Douglas, Alex Rogers, Walter Richardson, Geo Catlin, and J. A. Shipp.

The musical lasted for 53 performances (a record at the time for a musical created by and performed by Black talent). Not only did it find commercial success in America, but it also found life amongst theatergoers in London who were interested in the Black American experience. It went on to London in April 1903 to the Shaftesbury Theatre and a special performance for the royal family at Buckingham Palace. Since its debut on Broadway, there has only been one notable “revival” in 1999 produced at the Henry Street Settlement in  New York City directed by Shauneille Perry (with a remodeled script to fit the current time period).

Today we honor the contributions and sacrifices of those who brought In Dahomey into the spotlight. Without them, we wouldn’t have musicals like Shuffle Along, Dreamgirls, Ain’t Misbehavin’, and so many other timeless and brilliant all-Black musicals that give a glimpse into our harrowed, yet resilient past. Happy Black History Month!