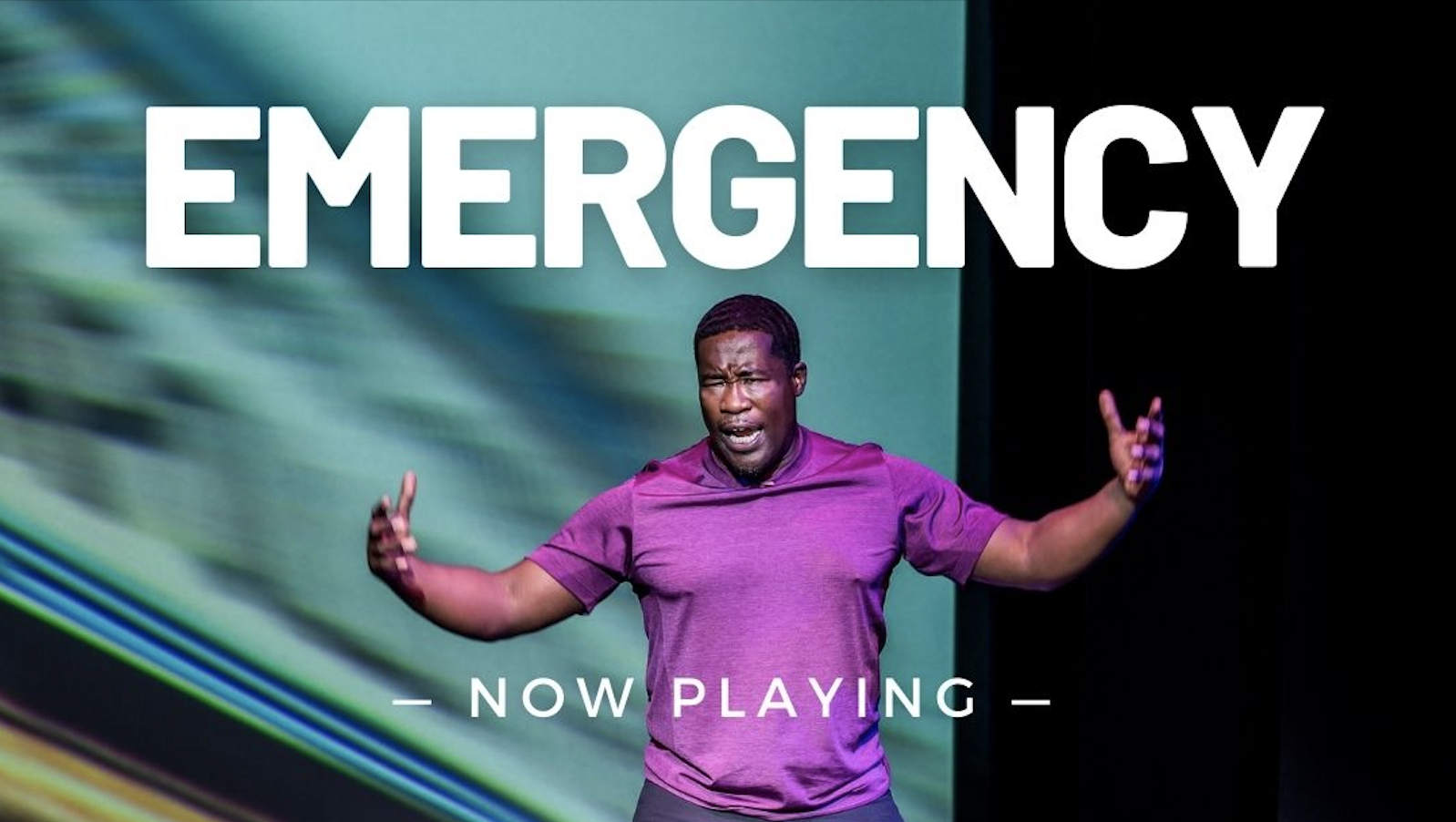 EMERGENCY! is billed as a captivating theatre experience that begins when a slave ship emerges from the depths of the Hudson River in contemporary times. Funny, thought-provoking, and always entertaining, Beaty performs over forty characters that together unearth the many meanings of freedom across Black America.

Raised in Dayton, Ohio, a child of a heroin-addicted, incarcerated father, in and out of prison 60 times and an older brother addicted to crack cocaine also in and out of prison, Daniel Koa Beaty is a passionate advocate for criminal justice reform as well as a voice for the impact of mass incarceration on children and families. For years, Daniel battled low self-esteem and depression rooted in his childhood trauma, including physical and sexual abuse, even as he graduated at the top of his class at Yale University and American Conservatory Theater.  He soon discovered the power of the arts to help heal childhood trauma, transform that pain into power and inspire a new generation of change agents to dismantle the systematic racism and oppression at the core of the challenges Daniel, his father, brother, students and so many Americans face.

Daniel’s work as an actor, singer, writer, and activist is deeply rooted in a desire to tell stories that illuminate our shared humanity by giving voice to the voiceless and often overlooked in our society. He believes a story is at the heart of every challenge and every possibility, and we individually and collectively have the power to write a story that creates opportunity and access for all.

An award-winning actor, singer, writer, and community activist, Daniel’s critically acclaimed plays Through the Night, Emergency, Mr. Joy, and The Tallest Tree in the Forest – Paul Robeson, have been performed at venues ranging from the Public and Lincoln Center to the White House and maximum-security prisons. He has garnered numerous awards including an Obie award for writing and performance and five NAACP Theater Awards.

We had the chance to sit down with the multi-hyphenate artist. Check out the full interview below.

DREW SHADE for Broadway Black(BB): Emergency. Why bring back your play Emergency now?

DANIEL KOA BEATY: We’ve all been through such an intense time with the pandemics of cOvid and race in this country and Emergency imagines if a slave ship were to rise in front of the Statue of Liberty in front of New York City in the present day. It’s really an opportunity for us to ask what stands in front of our freedom and what stands in front of our ability to see ourselves as connected to each other and responsible for each other. I think that’s really a question we’re asking as a nation and as a world right now. I think also people are a bit overwhelmed by all we’ve been through and Emergency uses music and humor, it’s a play with over forty characters. It’s an inviting theatrical way to process a lot of what we’ve all been dealing with.

BB: How has your approach to the piece changed?

DANIEL: You know this is my first time back on stage in over two years. I’ve always looked at my opportunity to perform as being a vessel. A vessel for spirit and I define spirit as God and also ancestors. I feel even more of an urgency to be a vessel to offer something that’s going to feel healing, inspiring, and loving to people because of all that we’ve been through. So, I would say that my approach is the same but the sense of urgency and the desire to have it reach people is even more profound.

BB: Do you have any rituals that help you get into the space of this piece?

DANIEL: Absolutely. I do a lot of stretching and vocal warmups because to play the characters I have to go very high in my range to very low. Then I also have a moment of prayer where I really offer myself as a vessel to the spirit and just ask that the story but also even just the vibration of my voice, of the body in space can be a balm, can be a healing, can be a joy, and inspiration to someone in the audience.

BB: We’re in a time where it seems more people want to create work for themselves. You’ve done multiple one-man shows where you’ve played multiple characters. Do you have any advice for someone looking to do the same?

DANIEL: The main thing I would say is..something I say is that purpose is the bridge past ego and purpose is rooted in what we can give. And ego is rooted in a focus on self. And so a lot of times when people hear ”solo show,” one of their fears is that the person is just going to be up there kind of showing off or it’s going to be self-absorbed or boring. But, one of the things that I’ve found is that if you root the storytelling in what you want to create and then also your expression of it, in terms of something you want to say that’s greater than one’s self, if there is something you want to say about humanity or about one of your passions, while still making it personal and theatrical and exciting using your talents that that’s going to reach audiences more but its also going to make it more producible.

You may remember Daniel KOA Beaty from his amazing performance of “Knock, Knock” on Russell Simmons presents Def Poetry Jam. It’s still as fresh as when we first watched it. Watch below!