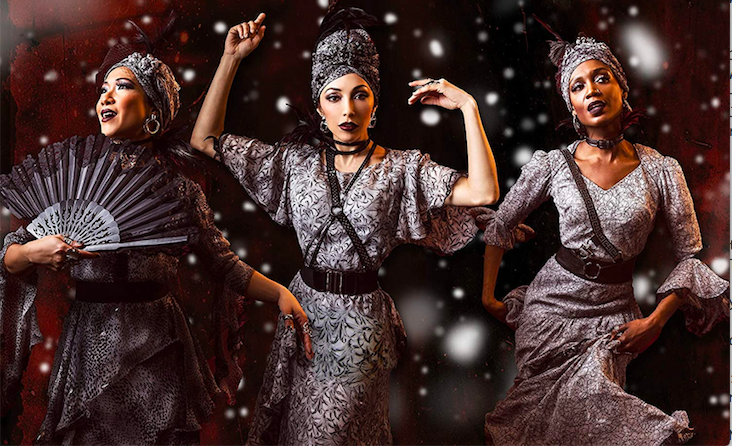 It’s time to cozy up next to the fireplace, pour yourself a nice glass of egg nog, and let the smooth sounds of Black Broadway take you to a winter wonderland. One of the greatest universal gifts we get every year, is a new holiday album by some of our favorite artists. Broadway stars are coming out with some jingle-worthy records to get you through the holidays.

The cast of the Tony winner for Best Musical, Hadestown, is sharing their underground holiday sound with their cast album “If the Fates Allow (A Hadestown Holiday Album).” Led by the ladies who play The Fates in the musical – Jewelle Blackman, Yvette Gonzalez-Nacer, and Kay Trinidad – the album features other members of the cast including Tony-winner Andre De Shields who lends his jazz and blues notes to the classic “Blue Chrismas.”

“White Christmas” by Grammy-nominated Jawan Jackson (Ain’t Too Proud: The Life and Times of the Temptations), is what Santa would be blasting in his sleigh as he goes from home to home. His velvety bass notes take us on a journey that tempt our desire to be with our loved ones for Christmas.

Carly Hughes (Pippin) brings a little fun and a lot of wonder with her Chistmas album “Mistletoe & Carly.” The Broadway leading lady playfully takes on the Eartha Kitt classic “Santa Baby” with an upbeat flair that’s sure to make Rudolph blush.

Another Tony-winning Hamilton alum, Daveed Diggs, takes Hannukkah and throws some stank on it. His new single “Puppy for Hanukkah” is a dream for every kid wanting a canine companion to call their own. The song takes us through the eight nights of the traditional Jewish holiday with lyrics like, “Night two, what it do, candles get lit. Latkes, sour cream is the best dip…” Check out the music video too!

Other holiday albums to check out from other Broadway alum:

Download them all today on Apple Music, iTunes, Spotify, Google Play, or Amazon.

“WHO MAKES THE FLOWERS BLOOM AGAIN, IN SPITE OF HER MAN? SHE DO WHO’S DOING THE BEST SHE CAN? PERSEPHONE, THAT’S WHO!“ The producers of Hadestown, winner...

Jawan Jackson (Ain’t Too Proud) & Amber Wright are expecting a new addition to their family! A few weeks ago, the couple creatively announced...