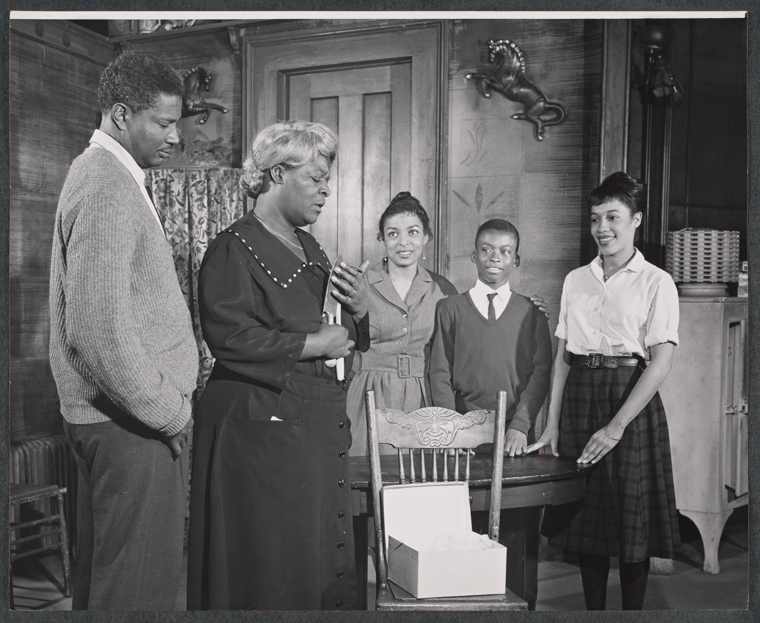 Today marks the 62nd anniversary of the Broadway debut of Lorraine Hansberry’s landmark play A Raisin In the Sun. It was on this date that history was made as Hansberry was the first African American woman to have her play produced and performed on Broadway; it was also the first Broadway play to be directed by a Black person (Lloyd Richards). It opened at the Ethel Barrymore Theater (and later moved to the Belasco Theater) on March 11, 1959, and played for a total of 530 performances before closing on June 25, 1960.

The play centers around the Youngers: a family of five that lives in a 2-bedroom apartment on the Southside of Chicago. Set to the backdrop of post-WWII, the family’s pursuit of success is driven by the idealization of the American dream; often thwarted by the consequential effects of racism, cultural appropriation and identity, and generational differences. Hansberry gives the reader, and oftentimes the performer, an eye-opening look into the Black experience in America with questions of freedom – educational and economic – ruling the conversation.

The play echoes many of the circumstances and accounts of the playwright’s family from the 1940 Supreme Court case of Hansberry v. Lee, which gave them a voice in the judicial system to fight against racial discrimination in the housing market.  Inspired by that, she wrote parts of her truth through the language of a family who only wanted their slice of the American pie; a slice that would feed their spirits in a world that starved them of their identity.

Director, Lloyd Richards, with the cast of A Raisin In the Sun (Friedman-Abeles/New York Public Library)

A Raisin In the Sun has seen a long history on Broadway and around the world. After the original production was nominated in 1960 for four Tony Awards, the story became a universal tale of hope and success. The original production starred Hollywood leading man Sidney Poitier (later succeeded by Ossie Davis), Ruby Dee, Claudia McNeil, Diana Sands, Louis Gossett, Ivan Dixon, Lonne Elder III, John Fiedler, Glynn Turman, and Ed Hall. Multiple iterations of Hansberry’s classic have graced the stage and screen over the last 62 years:

Raisin (a musical based on A Raisin In the Sun) debuted on Broadway in 1973. The book was written by Hansberry’s former husband and starred Joe Morton, Debbie Allen, Virginia Capers (Tony winner for Lead Actress in a Musical), Ernestine Jackson, and Ralph Carter. It also won the Tony Award for Best Musical.

2008 tv movie event starring many of the leads of the 2004 Broadway revival.

2014 Broadway revival at the Ethel Barrymore Theater (where it originally played in 1959) starring Denzel Washington, Sophie Okonedo (Tony winner for Best Performance by an Actress in a Featured Role in a Play), Anika Noni Rose, and LaTanya Richardson Jackson. The production also won the Tonys for Best Revival of a Play and Best Direction for Kenny Leon (who also directed the 2008 tv movie).

The title was inspired by the Langston Hughes poem “Harlem,” which starts out with “what happens to a dream deferred? Does it dry up like a raisin in the sun?” It is the hope in the midst of suffering and the strength in the midst of pain that makes this classic theatre work a blessing to the arts community.

In honor of Women’s History Month, Broadway Black honors Lorraine Hansberry. Your dream is a gift to us all.