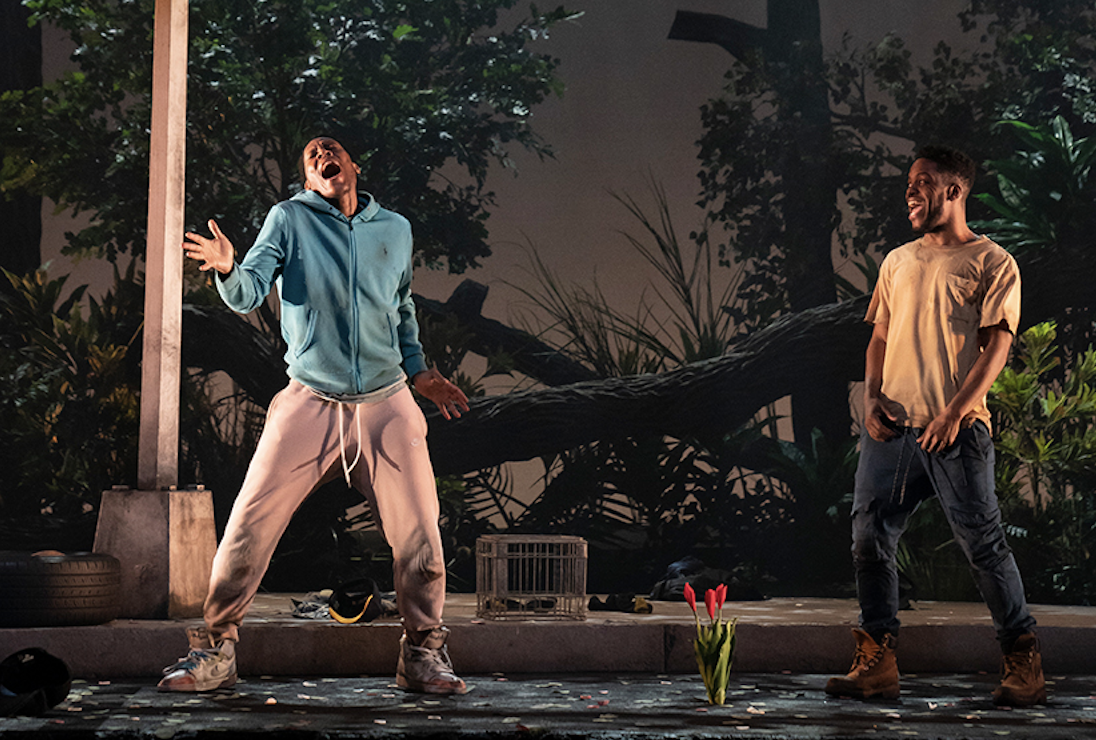 Pass Over, written by Antoinette Nwandu, is a message about the Black Liberation Movement. The first work by a Black playwright at the August Wilson Theatre is an Afro-Surrealist play that oscillates through time–now, right now, 1855, and 13th century B.C. The setting evolves from an unnamed ghetto street, a plantation, to Egypt, and although we walk through the doors from the streets of New York, America is not the only country in this conversation. Under the direction of Danya Taymor, Pass Over is a symbol of hope for ending police brutality against Black bodies.

Jon Michael Hill (Moses), Namir Smallwood (Kitch), and Gabriel Ebert (Mister and Ossifer) are three magnificent storytellers. Their performances were filled with trust, commitment, and love for each other through this physically and mentally challenging work that is also a lived experience outside the theatre. The strength in their vulnerability to stand before an audience hoping their performance is so well-received that we see the characters could be them is awe-inspiring. I empathize with the actors more than their characters. It is a performance, but it’s not…but it is. To bear the weight of this discussion at any time in history, gratitude to them for showing up to do the work. All the flowers and ovations are deserved.

I was immediately drawn in by their electric energy. Their physical agility, playfulness, and youth gave me hope that people saw humanity past their baggy clothes too big to hold them, too dirty to get close. The connotation of tramps and young Black men in the ghetto is a slippery slope for assumptions. As they repeat these lines, I feel myself saying the same thing, and it begins to sink in that it’s from a place of desperation to remove oneself from a world with a lack of imagination.

Moses and Kitch are clowns; Black clowns. I couldn’t help but think of Amos ‘n’ Andy along with the many stereotypes Black people have been required to perform. Their only possible reprieve was to perform like Mister. This is the myth and promise of assimilation that has never been proven or upheld. Yet, the humor bites back with undeniable facts. It’s so funny that you almost forget this is a lived experience and is happening right now just outside the theatre.

As his name might suggest, Kitch (Namir Smallwood) is not vulgar, garish, or in poor taste. In fact, he is sweet, kind, thoughtful, and smart to be fearful. Kitch believes in Moses and often reminds him of who he is and what he’s capable of. However, Kitch has to believe in the other Black man to believe in himself.

Placing Moses and Kitch on an unnamed ghetto street in baggy clothes and their over-use of  “nigga” is limiting. It doesn’t serve a purpose in the story other than another place-holder making them complicit in their invisible boundary to the Promised Land. Their use of nigga becomes self-incriminating as if to justify their current circumstance.

While they’re playing Promised Land Top 10, listing what they want to take with them when they pass over, there’s mention of Reverend Missus, their Sunday school teacher now in heaven. They remember the food she served— to add the paste of mustard seeds or not? This brought my attention to the question of faith, religion, and the chosen children of the kingdom. Judaism, Exodus, Liberation. Even with the title Pass Over, symbols like pizza crust for matza, the lament of “Why!”, and Moses’s namesake, the connections are there, but it’s never lifted beyond the page.

Gabriel Ebert is as charming as a snake in the garden of Eden playing both Mister and Ossifer. These are entirely two different characters, and having the same actor play them reinforces the roles of authority that white-presenting people portray and claim throughout history. Mister is a plantation owner and the pharaoh’s son in the character description, but he’s also kind, gentle, and terrified. Ossifer is a terrified cop, but also a patroller, but also a soldier of the pharaoh’s army.

The most astonishing moment written and performed on stage is the picnic with Mister. In this moment, as in all moments of the play, time is constantly shifting, and Mister becomes a symbol of historic colonizers. As Mister begins to pull out dishes from the basket, you might recognize that these are all cultural dishes from around the world. I saw a predator who spoke well, was polite, and seemed non-threatening—reminders of gentrification, segregation, and even colonization; an all too surreal experience. As you see this scene unfold in the theatre, the language is the only thing that gives any reason why Moses struggles with trusting this stranger. Still, because of the absurdity of the never-ending picnic basket, it gets lost in the humor.

The costumes, designed by Sarafina Bush, make it very clear when Ebert plays Mister and Ossifer. If the three of them are traversing through multiple time periods, the layers of time never come through. The actors flip their hats back and forth, take off a jacket, shoes, or socks, but the opportunity to experience how this play captures centuries within seconds is lost. While this play is tied to Samuel Beckett’s Waiting for Godot, the street lamp visible the entire play did not serve the surrealism of the play or the living nightmare that these men are experiencing— have experienced throughout time.

I felt bamboozled by the suggestion that paradise is here, and I just don’t see it. The message is marijuana being legal while people have been incarcerated for selling and using it for years. It was an absolvement of all wrongdoing, a denial of all systemic bias, and there was no doubt why Moses and Kitch felt helpless in their own liberation. Language like “niggas like us” reinforces the false narrative that niggas are not Black people. Anyone who has experienced police brutality, systemic bias, or racial profiling knows it does not matter if you have a degree, wear a collared shirt or hoodie. The implication is that it is the fault of Black men with saggy pants and hoodies using the word nigga that gets them killed.

What makes this an Afro-Surrealist play is that this is the past and present compounded at one time. It is heavy to take in the global perspective of the Black Liberation Movement. Yet dismissing the experience of Black, Indigenous, and Immigrant histories continue to deny their right ever to exist.

Taymor serves as the liaison between the playwright and the audience. Unfortunately, the staging and punctuations have not evolved enough for a diverse audience. The vision felt distant to the comprehension of the complexities of intersectionality, suffrage, and self-determination. There was emotion, skill, and tenacity, yet what was on the page was on stage.

The work, labor, and sweat from Nwandu’s pen is brilliant. Unfortunately, I don’t think this production is where you will see the light. Read other versions of the play and have conversations within your community. With any play, novel, or stanza of a poem, digging deeper is where the real gems are. All that glitters ain’t gold. Work that leads to honest conversation and progressive impact is the work we need—the truth. You can handle it. I truly anticipate the success of Pass Over beyond the Broadway stage. Hopefully, it will spark informed critique of art, society, and Black lives. Here’s to our liberation.

In this article:Antoinette Nwandu, PASS OVER

My Book of Mormon Family by Kimberly Exum, Broadway’s Nabulungi

Wicked’s Brittney Johnson Speaks Out About Racism on Broadway

The Lion King Returns To Broadway & Live Streams on TikTok!