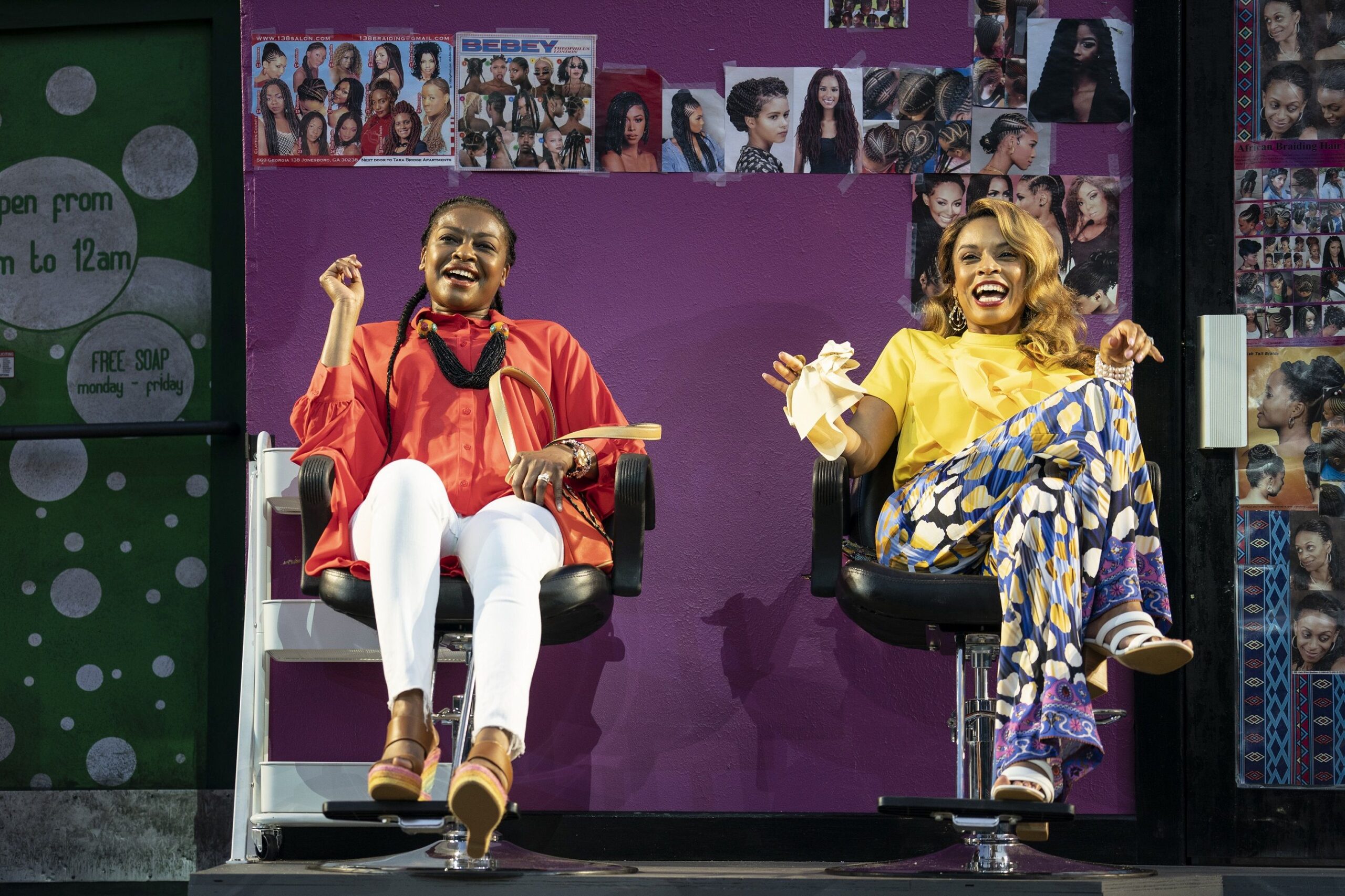 This masterful adaptation of William Shakespeare’s Merry Wives under the direction of Saheem Ali is a dream turned reality by a detail-oriented team. It is a heart-felt joy to see a production present inclusivity through the use of dialects, sexuality, and the diaspora of African and Black cultures.

The story begins outside in the Delacorte Theatre, welcomed by Farai Malianga drumming and calling to the audience. Malianga calls and our response is “Amen” in different African languages to remind us we’re here together, no matter where we’ve come from. We tap into the ancient history and art of story-telling through this microcosm of the West African and Black community in Harlem, New York City.

Anne Page (Abena) is a beautiful young woman who is to be matched with the shy tongue-tied Slender (Joshua Echebiri) under the orchestration of Mister Kwame Page (Kyle Scattlife), Shallow (Julian Rozzell Jr.), and Pastor Evans (Phillip James Brannon). This young man has some competition with the extravagant Doctor Caius (David Ryan Smith) and the valiant, sweet Fenton (MaYaa Boateng) also vying for the hand of Miss Page.

Falstaff’s (Jacob Ming-Trent) picture can be seen beside the word “trouble” in the dictionary and you can’t help but love him. His mistake and our enjoyment is in his persuance of best friends Madam Ekua Page (Pascale Armand) and Madam Nkechi Ford (Susan Kelechi Watson). Falstaff is a player with no game to match the quick wits this tag-team duo serve. Mister Nduka Ford (Gbenga Akinnagbe), played by his suspicion and jealousy, goes under locs and cap with a Jamaican accent to get information from Falstaff so he can catch Madam Ford in the act of infidelity.

The messengers: Mama Quickly (Angela Grovey) the unassuming woman who knows everyone’s business, Simple (MaYaa Boateng) who sounds like Roscoe’s younger brother from MARTIN, and Pistol (Joshua Echebiri) who is no one’s fool are an integral part to keeping the ball of confusion and laughter in play. I still am wrapping my head around how outstanding these actors were at seamlessly playing two roles. Every single actor is a beast at their craft and it comes across as if  they are having as much fun as I did.

The attention to detail that the visual design team displayed is breathtaking. Beowulf Boritt (Scenic Design) is an architectural DJ spinning public and intimate spaces from the brownstone stoop, to Falstaff’s boudoir, an African hair salon, to the Citi Bikes rolling through streets without bike lanes. Jiyoun Chang (Lighting Design) frames each scene with a focused weight that keeps the audience and characters grounded. In an instant the treetops behind the stage explode with rose-colored light, and we are taken above and beyond into a spiritual realm with Nature, the stars, and spirits. Grovey embodies the magic and wonder of this moment with her song and heartfelt message calling all spirits. The specificity to color, draping, and embellishment that Dede Ayite (Costume Design) gives each garment further identifies the unique cultural differences between each character as unspoken exposition.

The social commentary woven into the structure of the play is fascinating. The various accents and dialects from this West African community elevates an already heightened text, and yet it is relatable. It decentralizes Shakespeare and Westernized theatre as the focal point and eloquently reminds us of the origin of theatre beginning in Africa.

Initially I connected with Falstaff because we were wearing the same shirt. As the play continued, the specificity of character description by Bioh portrayed by the actors compelled me to consider the purpose of him being Black American amongst African-Americans. The range from Falstaff to Dr. Caius illustrated the culturally rich diaspora Black peoples possess. It also reflected long-standing conversations within the Black community about cultural differences between Black Americans and Africans.

As I witnessed it, Fenton appeared as a gender non-conforming queer person with mutual admiration and love for Anne. Mister and Madam Page dismiss Fenton as a match for their daughter. Their reasons are not vocalized, but in the context of today, there is room to assume it is because they are not a “man.” Their plan to set Anne up with Slender and Dr. Caius fails when the ceremony brings the lovers together. It’s undeniable that the future is love: self acceptance— and will not conform to old tropes.

Bioh’s Merry Wives delivers Poetic Justice in 2021 and is a welcoming gift back into the sacred space of theatre. This production takes leaps and bounds outside of the shell of the former canon and begs us to explore the spirit deep within ourselves.

In this article:Free Shakespeare In The Park, Jocelyn Bioh, Merry Wives, Saheem Ali, The Public Theater

It is Pistol that says in Shakespeare’s The Merry Wives of Windsor, “Why, then the world’s mine oyster, which I with sword shall open.”...

Twenty-twenty has been a trip. Nothing surprises us anymore, but it hasn’t been all bad. It brought free grocery delivery, cocktails from your favorite...