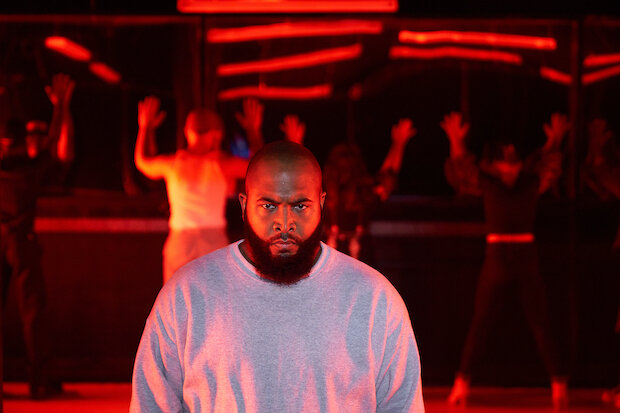 Chad Carstarphen in Between The Bars (Photo Credit: Mati Gelman)

Can you Survive in a System that is Meant to Correct You but Doesn’t Protect You?

Lynn Clay Byrne’s play, Between the Bars: Memories from the Visit Room directed by Benjamin Viertel, at HERE Arts Center, invites us in for a moment to sharpen our focus on the individuals out of our sight and mind affected by the global prison system. With the recent rise of media attention given to Rikers Island for their working and health conditions, the deaths and suicides of detainees, we have a reference to the realities that parallel this production. Watching Between the Bars I simultaneously wrestled with my own moral conscience, responsibility, and understanding of a system that I still do not know enough about.

We begin in a blackout with the voice-over of a poem written by detainee McGee (Juan Arturo). In the darkness we are all given a clean slate, entering inside the mind of a young man wrestling with crimes and his humanity from behind bars. “Wherever can one go to breathe? I search my memories bare. Perhaps I’ve misplaced an element which, combined would create air,” we hear McGee recite. White fluorescent lights open our view of the stage.

Through the six-foot openings between bars descending from the ceiling to the floor covered in hazard orange, we see three inmates in white jumpsuits, McGee, Chad (Christopher Mowod), and Attis (Chad Carstarphen) waiting at separate tables in the visiting room. A guard walks across the downstage floor to check-in visitors Arlene (Carol Todd), Chad’s mother, and Sorrell (Katie Mack) as they arrive. They greet the men and sit across from each other at their designated tables.

Through visitations between Sorrell and McGee, we learn that Chad was first incarcerated at the age of thirteen. After he was “scared straight” by correction officers, instead of picking him up, Arlene left him in jail overnight. He was found semi-conscious the following morning. Chad and Arlene’s story gives insight to how our past traumas can bind us and shape our knowledge and behavior. Those who fail to protect us, no matter how much they love us, are not always informed or choose the best means for our safety and development. In Between the Bars does not place blame, rather offers dialogue from different points of view to better understand the myriad of pathways to and experiences of incarceration.

Massud (Chad Carstarphen) is an inmate who visits with his partner Kaley (Nowami Rattray) insisting this is his last time and that when he is released he will be a better provider to their relationship. Massud announces he has found a job, and with Kaley’s response, we see another side of the struggle on the road to redemption. Even though both of them have survived his sentencing, it is not certain their relationship will survive his return.

Attis is an innocent young man who doesn’t know he has been framed for a crime he did not commit. While incarcerated he creates a business plan to operate a mobile “doggy groomin’” service called “Rrruff & Ready!” The hope is evident. The urge to applaud Attis for overcoming his circumstances and doing the right thing feels valid. Yet the question that remains for me is “How is the correctional facility supporting the efforts of rehabilitation?”

Mohawk (Akeil Davis), a young boy detained for reasons unknown, is quiet and has much to learn about how the system operates inside. What I saw of Mohawk is the ghost of young men who could not see their future in society or a life behind bars and chose a different way to end and restart.

Behind the many masks of anger is fear. At Arelene’s last visit the call for improvement and the implementation of mental health services is heard loud and clear.

The actors are tasked with the duty of portraying multiple characters as they move to different tables in the space, with slight changes to their costumes and affects to dialect, reestablishing new characters and relationships. Akeil Davis’s attention to detail in assigning physical gestures and speech patterns was most convincing. From the shadows, he stepped into the essence of each individual he portrayed. Nowani Rattray (Tisah and Kaley) was a delight to watch as the nuance of her tactics guided her physicality and vocal quality in each scene.

The issues that plague the prison system are not new to public discourse. Orange is the New Black, OZ, and Girls Incarcerated have all given us a representation of what life is like inside for both detainees and prison workers. Remarkably, the production progresses past pondering “What can I do to correct facilities that enforce a system of oppression” by including talkbacks that offer a platform to local organizations committed to restorative justice and reform of our prison and jail systems.

Between the Bars: Memories from the Visit Room brings us into the room for an intimate conversation we are either unaware of or too busy to have. This live depiction of an ever-evolving concern is powerful, relevant, and timely. Whatever side of the table you sit when you enter, you will leave with more information and resources to take the necessary steps towards actionable change.

In this article:Between The Bars, Lynn Clay Byrne